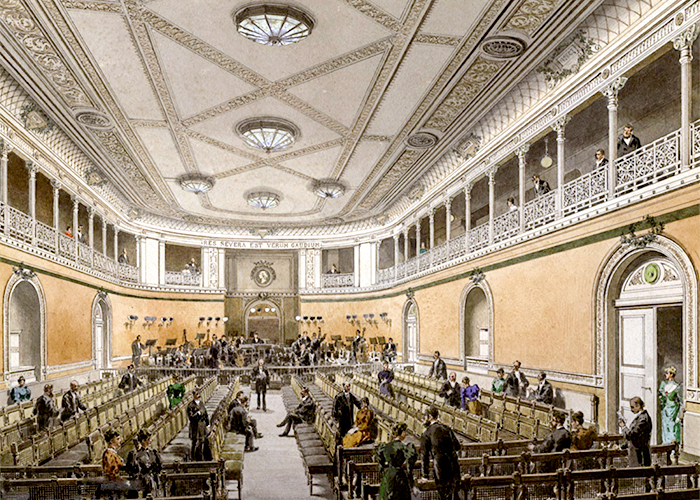 In the fall of 1871, after having become established in Vienna, Anton Bruckner embarked on a new symphonic project, his fourth, which in less than a year would result in a completed and copied score of nearly 2000 measures. Whether or not it started that way, it turned out to be modeled upon the ninth symphony of Beethoven in many formal and stylistic features, and even after the creation of seven more symphonies of ever-increasing complexity, it still holds the record in his work of length in terms of measure count.

This symphony, eventually designated by the composer as his Second, was in C minor, as was a previous symphony which he had already conducted successfully in Linz. The earlier symphony, known to all as the First, is a work of idiosyncratic inspiration, with unexpected textural shifts, sprawling developments, and thrilling perorations. But in the new C minor symphony he brought the formal structures under much closer control, so that they possessed an elegant symmetry and inevitability which are necessary to the success of a work of much larger proportions. The composition was finished on September 15, 1872, almost exactly 135 years ago, and one of the late phases of Bruckner’s labor on the new symphony was the addition of an elaborate, climactic fifth part to the Adagio in imitation of the five-part song form in the Beethoven. Aside from that change, the movements were conceived and composed in the order of first movement, scherzo, adagio, and finale, again corresponding to the order of the Beethoven, and it is in those forms and in that order that the symphony has been recently published by the Musicological Press of the International Bruckner Society in Vienna. That edition now permits the public to become aware of the full scope of Bruckner’s design for this symphony, which was destined to be the dominant model and template for his symphonic efforts for the rest of his life.

One of the elements of Bruckner’s style is the use of general rest-measures to create demarcating silences between large sections, or simply for effect within sections. In the Second this feature was prominent enough in rehearsal in the 1870s to give it the slightly risible nickname of “Pausensymphonie”. In subsequent revisions, culminating in the publication of 1892, many of these rests were removed. But in 1872 they are intact, including a group of three consecutive rest measures immediately before the recapitulation in the first movement. With them in place the long breath of Bruckner’s inspiration is more perceptible. We submit ourselves to his spacious time scale, and follow his emotional path wherever it leads. Nothing is hurried, yet there is immense momentum even when the tempo is slow. In his later symphonies, the idea of recapitulation gives way progressively to the technique of continuous development in first movements and finales alike, and there are no more pauses at that point. But here in 1872, at the beginning of his Vienna period, the composer is making full use of the resources of the already 100-year-long sonata tradition while still having the sonata and song-form paradigms serve his innovative purposes.

The Adagio began in July 1872 as a four-part structure, ABAB, with a coda, but later in the summer Bruckner placed before the coda an additional, elaborate statement of the A theme with a violin filigree in groups of six, then nine notes. The resultant ABABA plus coda became his favorite structure for slow movements, occurring in the Third, Fourth, Fifth, Seventh, and Eighth Symphonies, and with modifications in the Ninth. Yet in the Second it faced a serious problem. Before the addition to the movement, the second statement of the B theme led directly into the coda, with transitional material hinting shyly at a short passage from the Benedictus of the Mass in F Minor which Bruckner had recently conducted to critical and popular acclaim. But with the addition, the same coda had to be reached again with similar material at the end of the last statement of the A theme, which must not sound like a repeat, though he evidently did not want to lose any part of what he had already written. Accordingly, Bruckner prepared a new transition to the coda which contains a much more explicit quotation of the Benedictus, and it would be very difficult to take exception to the result.

This movement contains several exposed concert Cs for the horn, all but one of which were removed in 1873 and given to the clarinet and violas in preparation for the performance that year. This occurs in a well-known passage at the very end of the movement. Later the remaining C, in a different part of the movement, was removed, first by giving it to the clarinet during rehearsal, then in 1877 by excising the whole passage in which it occurs. The earliest version of the symphony is the only one to which these horn notes truly belong. The problem seems to have been more with the instruments than with the players. He also encountered a problem with this horn note in the first movement of the Third Symphony, in a passage which was written some time fairly early in 1873, and in the revisions of 1877 the note was reassigned. One has to be grateful to be able to hear the way Bruckner first thought of these passages.

In 1872 the scherzo had repeats assigned to both halves of the main scherzo and of the trio. At one of the performances which Bruckner led, 1873 or (more likely) 1876, the repeats were cancelled, with the cancellation retained in the revision of 1877 and the publication of 1892. With the 1872 repeats, the scherzo fills its prominent place as the second movement of the symphony, allowing the first movement to be more relaxed and lyrical. It is possible that the shift of the movement to third place, which happened in late 1872 or 1873, may have been the cause of the cancellation of repeats. When he next put a scherzo in second place, in the Quintet, once again the movement is quite substantial, though there are no repeats. And in the Eighth the second-place Scherzo is on a particularly massive scale, especially in the early version of 1887, in nearly every modern performance being as long as the first movement or longer. To have this increased weight appear in the Second in a position where it is most effective is nothing short of a revelation.

The development of the Finale of the Second Symphony has a symmetrical structure of four sections, present in all versions. The first and fourth sections received only minor modifications in the incremental revisions to which the symphony was subjected in its first five years, the quiet chords with which the development begins being abridged in 1877. However, the second part, a fantasy on the A theme, and the third part, a fantasy on the B theme, were both significantly revised and shortened in at least three phases. Once again the 1872 score has the longest and most interesting versions of these passages, the second part in particular containing highly dissonant music in very strange textures–a most distorted view of the A theme. One is reminded of the relationship between the first and last movements of Liszt’s Faust Symphony, where the noble, questing utterances of the first movement (Faust) fall apart into empty or aimless gestures in the finale (Mephisto). The texts of Bruckner’s later revisions are definitely easier to understand and much less challenging to both player and listener. It would be hard to insist that this music is programmatic, but it certainly has a strong emotional contour, much more compelling in the early version.

In both the Finale and the Kopfsatz of 1872, the codas contain two crescendos that build up from near-silence to great climaxes. This feature might be related to the double crescendo with which the finale of the Second begins (as do both outer movements of the Third and of the early version of the Fourth). In both cases, the first climax is cut off with quiet music, which in the first movement derives from the A theme, and in the finale comprises quotations of that same first movement A theme and the finale’s B theme. The second crescendo in the first movement ends with a quiet, chorale-like version of the A theme, while the second crescendo in the finale leads directly to the peroration in C major. The quotations in the finale remind one of the catalogue of themes near the beginning of the finale of Beethoven’s Ninth, and represent a technique that Bruckner would turn to later in his third and fifth symphonies as well. The various revisions, in one way or another, led to the retention of only one crescendo in each coda, just at the time in his career when he no longer used the double crescendo at the beginning of new compositions. The principal casualty was the catalogue of themes in the finale. Perhaps at that time he wanted to forestall the inevitable comparisons with Beethoven; we do not know. But the emotional content, and the richness of reference, are much greater with the double crescendos and “catalogue” of 1872.

Also, perhaps, related is the 1877 removal of the codetta in the recapitulation of the finale. This was the other quotation of the Mass in F Minor, from the Kyrie, which first appears at the end of the exposition in all versions of this symphony. In Bruckner’s style of continuous development in the later symphonies, this feature came to be dropped at the end of the recapitulation, so too in the Second with the revision of 1877. The 1872 version is closer to the classical paradigm, if only because it supplies the listener with an unmistakable signpost, a reference which tells one that the final argument approaches. The 1877 version of the finale contains only 613 measures instead of the 806 of the early version, but the listener could still find it more challenging simply because the emotional shape of the later version is not as bold. At any rate, our new editions of both the 1872 and 1877 versions do not permit the mixture and conflation of versions, which only serve to confuse the performers, the listeners, and the issues.

In the 1870s, during the course of performance and revision of the symphony, a number of clarifications and additions were made in tempo indications. One of these was a change from Allegro (or Ziemlich schnell) to Moderato in the tempo of the first movement. Other changes and additions seem to have been made to the parts by the players on instruction from the podium, since they are entered into the parts in a wide variety of handwritings. Many other details of performance found only in the manuscript parts, as well as the copious and extremely carefully-edited expressions and articulations present in the first publication, have been included in the new edition, with the purpose of providing as comprehensive an account as possible of what we know about this symphony. Strangely, there is among these indications a complete absence of any requirement to play the second theme more slowly than the first and third themes in the exposition and reprise, even in the printing of 1892. Not until the first movement codetta, with its lovely woodwind solos, is there any indication to take a slower tempo. Nonetheless there are indications, particularly from early recordings of the Second Symphony by Ernst Praetorius (1937), Ernst Prade (1938), Georg Ludwig Jochum (1944), Franz Konwitschny (1951), and Volkmar Andreae (1953), that many years ago conductors felt able to use quite a bit of freedom in determining details of tempo and nuance–including systematically taking the lyrical yet densely contrapuntal B themes at a relaxed and flexible tempo–which may have been just the way Bruckner himself wanted his symphonies to be played.