First state of the second version 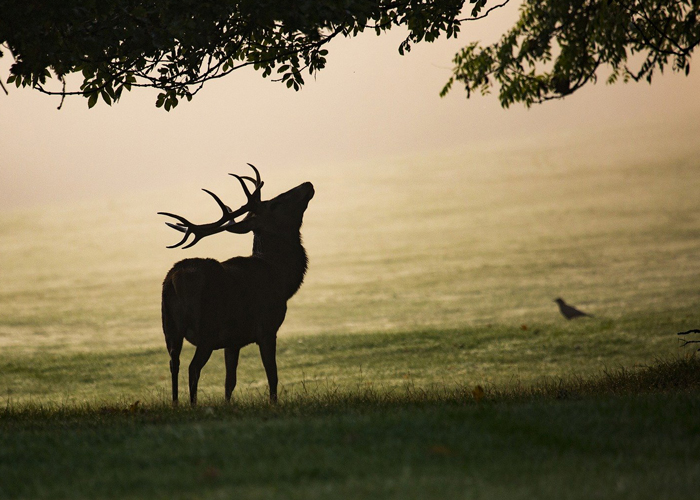 As part of Bruckner’s first great campaign of revision, carried out in 1876, 1877, and 1878, he prepared a new Jagd-Scherzo completely unrelated to the mountainous alphorn scherzo of 1874. Its main part is of 259 measures instead of the earlier scherzo’s 336, but the measures are much more detailed. It is in 2/4, but with very frequent triplet eighths which give it the feeling of great speed despite the complexity of the writing. Bruckner’s standard paradigm for scherzos is “rounded binary form”, in which the first half has well-defined opening and closing groups leading to a contrasting tonality, and in which partway through the second half the opening group reappears, followed by the closing group coming to rest in the home tonality. But in this scherzo he expanded the opening group to contain well-separated A and B themes, thus defining a simple sonata form. The overlapping canonic writing of the A theme or hunting motive which begins the music gives the impression of a great throng of hunters in “pink” astride their horses, wildly galloping over other people’s land. But if we accept this degree of pictorial meaning, the B theme must depict the hunted being chased from their forest homes, the deer, the fox, and the hedgehog. In the development the animals are relaxing in hiding from the hunters; a doe quiets her nervous fawns, and a noble elk is quietly grazing. But then the animals become alarmed, and run for cover while the hunters return. In the sylvan trio, Bruckner himself writes into the score (Wienbibliothek MH6777) “Dance melody, for mealtime at the hunt”. His image is vivid, but nobody dies and we can forgive the hunters, just as we forgive Trollope his hunting scenes. They are both much less cruel than Vivaldi in “The Four Seasons”.

The finale created at the same time represents a radical shortening of the original finale of 1874, carried out along the same lines as the revision of the Third. In it nearly all of the formal elements of the early version were preserved, but shortened and sometimes simplified. One thing he accomplished in the finale was removal of most of the references to the first-movement horn motto, either by deletion of passages or use of a different melody. Another was substituting simple rhythms for the even groups of five notes used in the second and third themes. One of those simplifications finally became the basic rhythm of the coda. Their effect on the melodies of the second theme group was to make the whole passage lighter and more sprightly. Perhaps that is the reason Bruckner subtitled this version of the final the “Volksfest”, for a large provincial fair attended by many happy people. But the rest of the movement preserves the remote and craggy landscape of the 1874 version, with the addition of rushing winds during the mountain echoes near the end of the development. In the final peroration, we are still offered nine measures of pure E flat major. The tempos used in the sound file produce a finale of about 13½ minutes, about the same as that of the Seventh and not much smaller than the 14-minute finale of the 1876 Third. These are all quite a bit shorter than the more than 17 minutes of the 806-measure finale of the early Second.