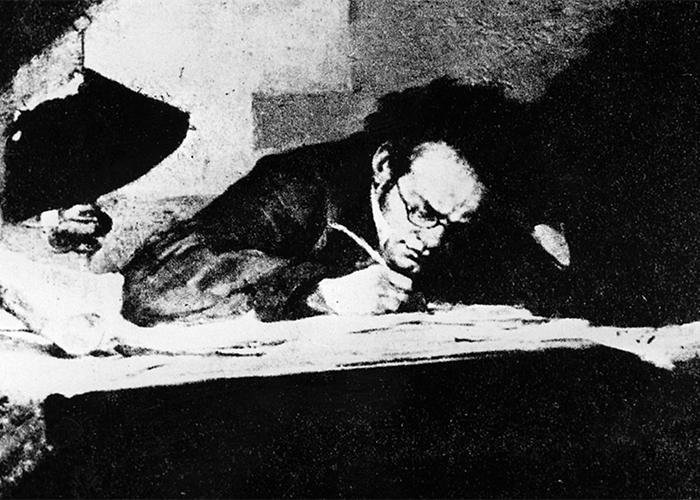 Schubert’s symphony in B minor, the most famous incomplete composition in all of music, has had a strange and chequered history. Left unfinished by its composer in 1823, it was promised by Schubert to the musical society at Graz but never reached there; it lay instead in the possession of the brothers Hüttenbrenner until 1865 when it was belatedly presented for performance to the conductor and Hofkapellmeister Johann von Herbeck. And at the first London performance, two years later, it was not presented as a two- movement torso as is commonly done today, but instead with the first entr’acte from Schubert’s music for Helmina von Chézy’s potboiler Rosamunde, Fürstin von Zypern as a finale. In the years since then, most people have not even heard that Schubert was well along with sketches for a scherzo.

The question of completing a musical composition revolves around two issues: whether there is enough material left by the composer to give a good idea of what the whole composition was meant to be like, and whether there is enough interest in it to make the effort of musical completion significant and rewarding to listeners and students of music. The second criterion is well satisfied for the Schubert B-minor symphony. It is an early essay in a very exclusive genre–the tragic symphony–and as such indeed is important for the whole history of romantic thought. The first criterion is satisfied for the scherzo, as the sketch runs through the whole main movement and the first section of the trio, and there are even 20 measures fully orchestrated by Schubert. The finale presents more of a problem, since there are no sketches labeled by Schubert as for the finale, but the long tradition of association of Rosamunde music with the symphony suggests that one should try very hard with it before giving up on the idea of completion.

In the scherzo, I orchestrated the parts left incomplete by the composer with as much color and variety as I could manage without going out of tradition. There are very strong indications in the fragment of complete orchestration that the winds were meant to dominate the sound, and I have carried out that concept. At one point the drum, echoed by the horns, pounds out the insistent rhythm of fate from Beethoven’s Fifth; that rhythm indeed occurs significantly in all four movements. The Trio I think of as a scène champêtre (rustic tableau) with bagpipe players on the one hand, elsewhere strings and brasses accompanying Ländler dancers in folk idiom. The attention of the observer shifts from one to the other, but his sorrowful emotions forbid him to join. Schubert saves many bold effects for his trios–remember those of the sixth and ninth symphonies–and this effort should be seen as in that tradition. In addition to the second section of the Trio, I supply a retransition to the Scherzo, as Schubert occasionally did, and a short and decisive coda.

The finale of a symphony with three such profound yet lyrical earlier movements must be extraordinary. The first entr’acte from the Rosamunde collection certainly provides the right sort of music. As Gerald Abraham says in his introduction to his completion of the scherzo (1971): “The [entr’acte] has very striking affinities–noticed by such eminent Schubertians as George Grove and Alfred Einstein–with the B minor Symphony begun more than a year earlier. It is not merely that it is in the same key, scored for precisely the same forces, and marked by similar romantic modulations; heard in the context of the whole, it seems to resolve the the conflicts of the first and third movements (from which the idyllic andante offers only a temporary escape), not triumphantly–unless one accepts the last seven bars as more than a conventional gesture–but in a spirit, mainly, of courageous acceptance of destiny, though still not without passionate protests.” At the same time, it has not seemed to “catch on”, although Brian Newbould’s careful completion of the symphony using it as the finale has been performed and recorded.

In my opinion, the deficiencies of the entr’acte as it stands, considered as a finale of the symphony, are these: First and most important, it is simply too short in comparison to the other movements. Second, following stage practice, it has no exposition repeat. (The exposition is the first third of the sonata form, in which the themes are first laid out in order. Repeating that section of a symphonic movement was almost universal in classical times, and common enough in romantic symphonies as well.) Third, the B major music at the end, perhaps meant to accompany the opening of the curtain on a dramatic scene, is simply too abrupt. Lastly, there appear to be not one but four Rosamunde pieces related to each other, and one of the others, the second entr’acte beginning in D major, sounds very much like a slow introduction to an allegro movement. To take this slow piece and adapt it to fit onto the first entr’acte supplied with an exposition repeat and an enhanced ending requires for justification a new scenario. Schubert is hard at work on the B-minor symphony when he receives a hurried commission from Chézy. It means money, always badly needed. Schubert has the finale worked out in his head, but his thoughts appear on paper only in the form of the Rosamunde music of the two entr’actes, the first Ballettmusik, and the Chor der Geister. Thus, changing as little as possible, one can reconstruct a finale seventy percent longer than the first entr’acte by itself–one that has not only the right mood, but also sufficient weight and spaciousness to balance the rest of the symphony. To do that I had only to write the first ending of the exposition (13 measures), a new ending for the movement (9 measures), and a transposed and newly-scored ending for the slow introduction (16 measures). These do not bulk very large in a finale of 580 measures (including the repeat), but they have a decisive effect on the symphony as a whole. Perhaps now this (first) entr’acte, by turns mysterious, violent, and gentle, described by Donald Francis Tovey as “grand tragic music”, will provide a fitting conclusion to one of musical literature’s most poignantly beautiful creations.

Listen to Symphony no. 8